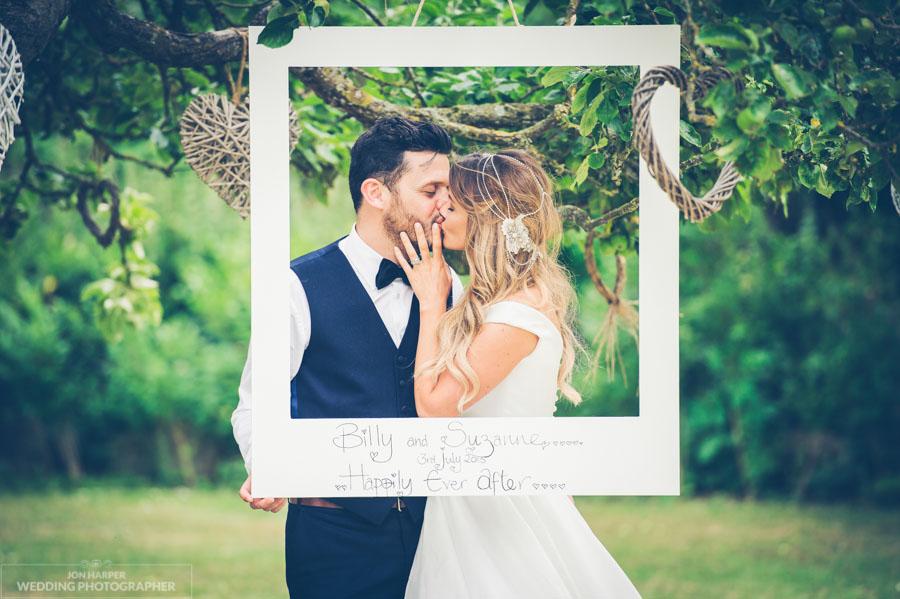 Over the summer Sandra and I left the Cotswolds here in Gloucestershire and headed off down to south to beautiful Somerset to both photograph and film the loveliest of weddings. As a Cotswold wedding photographer and film maker, its nice to have a change of scenery and head down South for a few days.  Especially if there is a gorgeous barn wedding to attend.

We travelled down from Cheltenham in Gloucestershire the evening before and stayed in a hotel in Glastonbury,  just so that we could get ourselves and equipment all prepped without any rushing,  bright and early the following morning.

When we arrived at Suzanne & Billy's rented cottage "Gray Manes",  Suzanne was very relaxed and having her makeup done by the talented Bristol based artist Elle Hitchins before having her hair done by award winning bridal hair go to gal Louise Alway.

Suzanne had a very pretty crystal head dress that she wore that was handcrafted by Australian based milliner Heidi which was woven into her hair by Louise which added a touch of class and sparkle.

When everyone was ready, we all headed off to the exclusive 800 year old Almonary Barn in the pretty Somerset village of Muchelney where by now a rather eager Billy was waiting. True to form, Billy's eyes lit up and a huge grin appeared across his face when he saw Suzanne in her bespoke Suzanne Neville gown and to die for, Christian Louboutin heels arm in arm with her brother as they walked down the aisle to the song All of Me which was sung so beautifully by Westcountry artist, Lauren Castle.

The ceremony took place up on the mezzanine floor of the rustic barn and was beautifully decorated with hearts, gipsofila and lots and lots of candles which gave the setting such a tranquil and romantic feel.

After the ceremony it was champagne and canapés on the lawn whilst some played croquet and others jenga.  At this time we seized the opportunity to get a few group shots of dear friends and family whilst battling the odd gust of wind.  It was such lovely warm day with an occasional massive gust.  In-fact Suzanne's veil managed to escape a couple of times and once during a photo it blew straight over her face as she flicked her eyes towards Billy - priceless!

As Sandra was with me filming a Wedding Highlights movie for the happy couple, I had taken my drone with me so that I could get some rather epic footage of everyone outside enjoying themselves. This footage was then cut into Sandra's films which adds an element of WOW.  You can see Suzanne & Billy's wedding movie right here.

The wedding breakfast was divine and set in the old part of the barn among all its rustic charms of a by-gone era. The top table was a quaint little setting for two, much like you would expect to see outside a boutique caffe in Paris.  Speeches were beautifully heartfelt - and I never tire of the stories I hear as the best man takes a dig at the groom.  Suzanne even got up after her brother, husband and best man's speech to deliver her own emotive words of gratitude to friends and loved ones.  Something of which is becoming more and more popular nowadays.

Later in the afternoon Suzanne & Billy went for a stroll though the little orchard in a secluded part of the barn's grounds to have a few moments to catchup with each other and to reflect on their magical day. I was not too far behind and managed to capture some beautifully romantic candid shots of the loveliest moments as they enjoyed each other among the Somerset apple trees. My documentary style is all about capturing the love, and on this day it was in abundance.

When we got back to the barn we were all treated to a brilliant gig by Bristol based band The Beehives who sounded amazing. Suzanne & Billy took to the floor for their first dance "Little Things" and wowed everyone with their moves. After the first set, it was time for cutting of what was a very delicious looking naked cake made by Peter from Kitchen in Langport (and yes it was as yummy as it looked) and we were all treated to pulled pork rolls which went down an absolute treat.

Later in the evening we said our goodbyes before heading back home to Cheltenham so that we could download and backup all of out photographs and film footage, recharge camera batteries and get everything prepped once again ready for another wedding the following day in the Cotswolds.

Here is a small selection from Suzanne & Billy's Somerset wedding collection for you to peep at, and in the meantime, we are going to hop it back to Cheltenham and get ready for our next Cotswold wedding photographer adventure.

If you would love to see their wedding collection hosted on their very own Cotswold wedding photography website, just click on this link and enjoy... http://jon-harper.co.uk.queensberryworkspace.com/suzannelovesbilly