Cotswold Wedding of Annice & Ravi at Barnsley House in Gloucestershire

Cotswold Wedding of Annice & Ravi at Barnsley House in Gloucestershire... 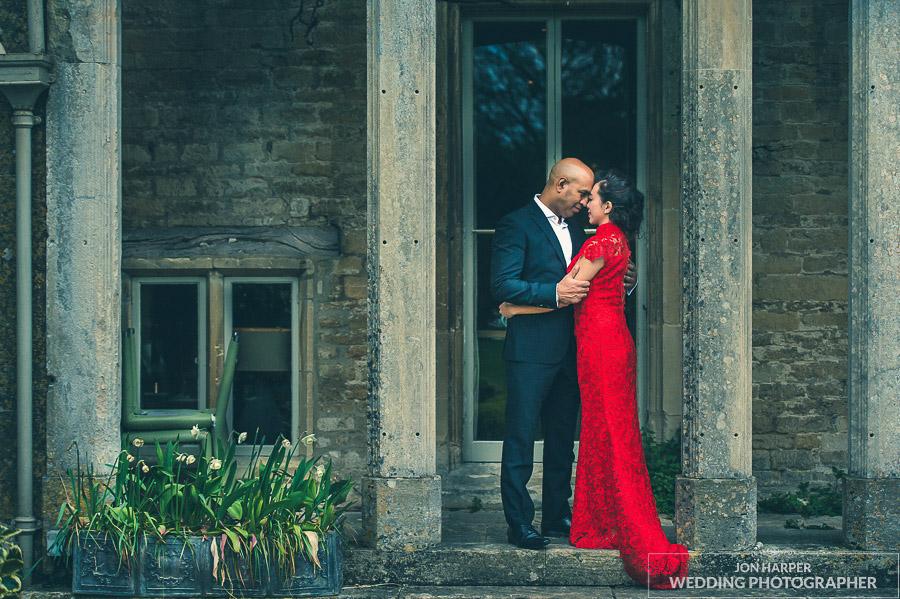 It was the early part of 2015 when Ravi got in touch with me from his base in Hong Kong to discuss the possibility of me photographing his and Annice's wedding here in the Cotswolds later in the year.  They had planned a fusion wedding as he himself is Indian and his soon to be wife Annice, Chinese and they both happened to love my relaxed style of Cotswold wedding photography.

Annie & Ravi planned to fly out from Hong Kong and to meet up with me at their venue, which still to this day is one of my favourite Cotswold destinations - Barnsley House.  I thought it a good idea to take a camera with me so that we could get a few Engagement shots, just to settle their nerves, before we went back inside to sit by the gorgeous open fire with our coffee's to discuss their plans for the big day.  Both Annice and Ravi, seriously are the loveliest of madly in love couples you could meet and I warmed to them immediately. They had such great ideas for their day, to make it special to them, loved rugby and were a lot of fun.  The way they looked at each other with the little glints in their eyes, I knew we were going to be in for some stunning and emotive shots on the day.

On the morning of the wedding in late September, we were treated to a beautiful warm sunny morning. I arrived and grabbed a few detail shots from the front of the manor before heading to the orangery where Annice and her bridesmaids were getting ready.  There was a Chinese tea ceremony planned that was to take place outside the old temple in the lush gardens at Barnsley House.  Ravi and his guys came over to the orangery where he was blindfolded and had to guess which hand was Annice's by touch as all the girls stood around him. Lucky for Ravi he got it right especially after the girls sneakily shuffled Annice around to put him off.  After the blindfold was removed he then had to negotiate a financial sum to each bridesmaid before they would consider releasing Annice to him.  Lucky for Ravi his best man and senior financial negotiator was on the case and eventually a deal was struck and all the girls were happy.  Personally, I think Ravi got off lightly and could have doubled the sum as Annice looked stunning!

After the parlour games had finished we all walked through the gardens to the temple to where the tea ceremony was to take place.  The tea ceremony is really a formal introduction for the bride to the grooms family and will take place on the wedding day when all of the families are together. Gifts are given by the elders of the families to the couple which include the most delicately crafted gold jewellery.

As the day was warm and beautiful the ceremony could be held under the trees. Both family and friends all gathered around the old temple where Ravi's young nephew stood on the old Cotswold stone steps and sang as Annice and her very proud father walked her down the aisle.

After the ceremony and plenty of confetti throwing it was champagne and canapés on the lawn where long time friends and family from two cultures hugged and chatted, elated with meeting each other for the first time. The reception was held in the rather large marquee at the bottom of the garden, in the orchard which looks absolutely stunning.  The speeches were heartfelt and emotional one minute and then absolutely hilarious the next, especially when the slide show started featuring Ravi's life from a kid to his teens. After the speeches, as the sun was setting we decided to grab a few minutes so that the three of us could go and get a few nice romantic photographs around the house and gardens.  The sun was setting rather quickly so I opted for shooting in natural light (my favourite) before switching over to off camera lighting when it got dark for some nice moody shots.

Later in the evening England was playing Wales in the Rugby World Cup, and Ravi had made arrangements for a large screen to be available in the private bar so that he and the boys could watch the game. Well, everyone piled on in there and it was rammed to the rafters with everyone cheering on England - except for two welsh supporters.  I managed to squeeze down the side of the bar and set myself up under the screen so that I could capture the buzz and reaction on everyones faces.  The atmosphere was electric and it was a good hard game until Wales pulled it out the bag and won! After a few drinks, It didn't take long for everyone to cheer up and hit the dance floor where the DJ played some awesome tunes and everyone danced their socks off.  It was so cool seeing Ravi's mum, aunty and uncle Bollywood dancing to some good hard trance - classic!

Barnsley House & Spa is another Cotswold favourite of mine, and even when I am not shooting weddings there, they are very generous and let me use their gardens for my Engagement shoots. The house itself is lovely and everyone that works there is caring and attentive. The accommodation for guests is top notch and the food is beautiful! You probably know by now after reading previous posts of mine, that I really do love my food!  Well, Barnsley House will not disappoint.  They use fresh local Cotswold ingredients to produce the finest of wedding menu's.  The food quantities are perfect and plentiful and your guests will love it!

After the wedding Annice and Ravi spent a few more weeks here in the Cotswolds and Cheltenham sightseeing, before heading home to China. The very happy couple have just ordered their Queensberry Album. This is going to be the largest album that I have produced to date.  It is a 18" x 12" Flushmount with a powder blue micro leather cover and will contain 270 images across 60 pages which will protect their beautiful collection of Cotswold wedding photography - I can't wait to see it!